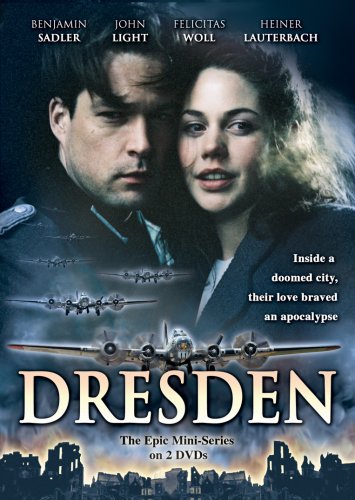 January, 1945. In the uncertain days leading up to the Allied bombings of Dresden, Anna (Felicitas Woll) discovers Robert Newman (John Light), an injured British pilot, hiding in a hospital cellar. Torn between loyalty and desire, the young nurse risks everything to help him recover. As Anna struggles to keep his true identity a secret and Robert battles to survive behind enemy lines, a catastrophic fate descends upon the city.

A love story set amidst the chaos and horror of World War II, Dresden tells the tale of a beautiful young German nurse who falls in love with an injured British pilot. Anna (Felicitas Woll) is engaged to a wealthy doctor, but she wants more than the bland certainty he can offer her. While on her rounds at the hospital, she discovers Robert (John Light), who is in hiding. Anna knows little about him and is initially unaware that he is a British soldier, and therefore her enemy. What starts as a quiet, private romance escalates into an affair that the couple has a difficult time containing. Woll and Light make beautiful leads, but it's the supporting characters who stand out. Dr. Carl Mauth (Heiner Lauterbach), Anna's father, is a complicated and compelling man who will resort to stealing morphine if his patients are in need. Watching his emotive face, viewers understand his intent without having to hear him speak. Dresden's filmmakers do a formidable job of presenting both the Brits and the Germans as flawed people who aren't sure what is right and wrong. Set in January, 1945, prior to the Allied bombings of Dresden, the German production team does a fine job of meshing soap opera type melodrama with feverish action. There are some scenes that are horrific and gruesome to watch. But more often than not, they succinctly set the tone for the violence that accompanies war. Though the three-hour miniseries (which offers both English and German with English subtitles) has been favorably compared with the epic love story portrayed in Titanic, it also shares some of the sweet aspects of Summer of My German Soldier, a 1978 made-for-TV movie that depicts the unlikely friendship between a young Jewish girl and a German POW. As with war, there sometimes is no explanation for love. It just happens. --Jae-Ha Kim