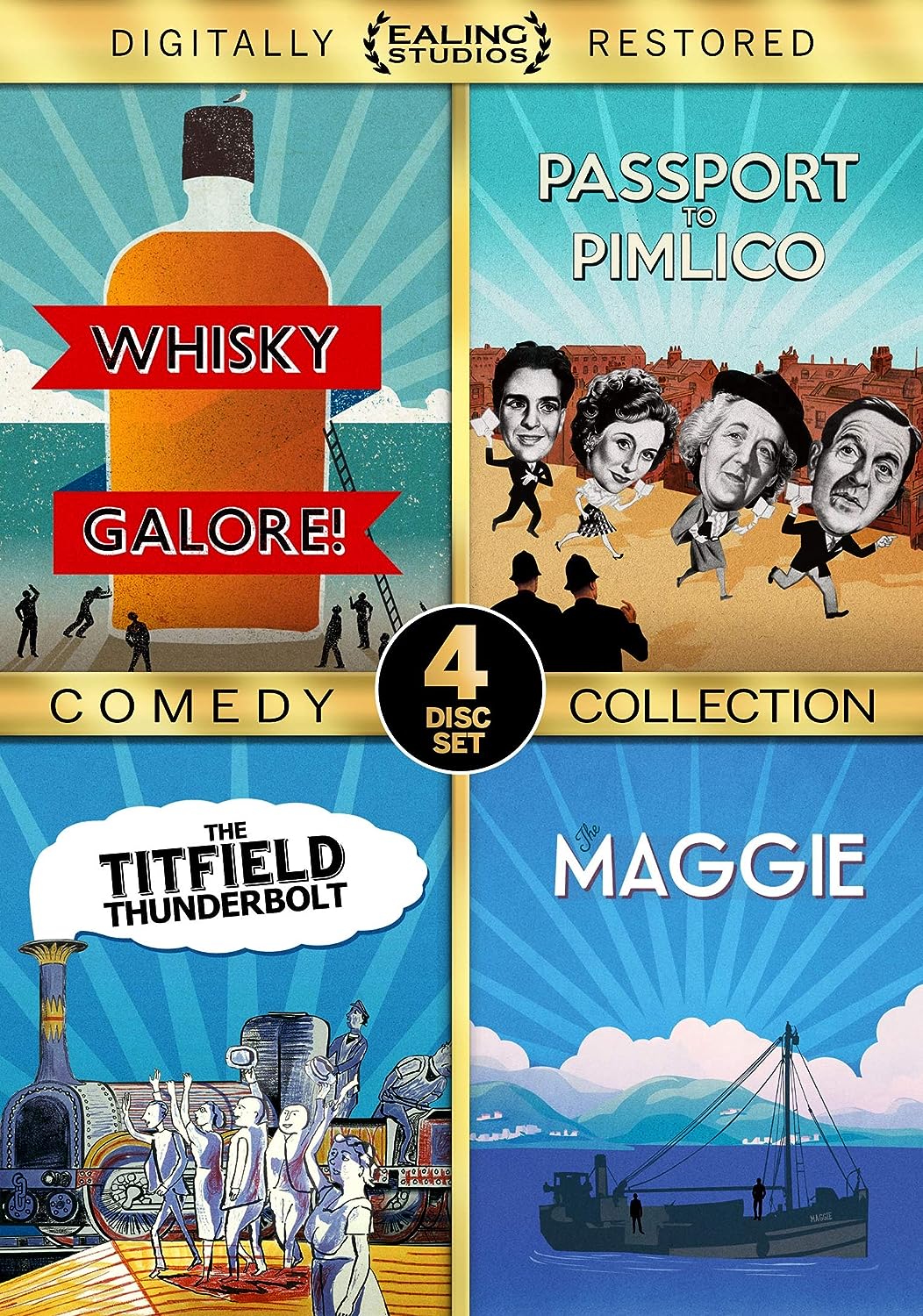 Ealing Studios output from the 1940s and 1950s helped define what was arguably the golden age of British cinema. Featuring contributions from Ealing regulars such as screenwriter T.E.B. Clarke (The Lavender Hill Mob, Sons and Lovers) and directors Charles Crichton (Dead of Night, A Fish Called Wanda) and Alexander MacKendrick (The Ladykillers, Sweet Smell of Success), this digitally restored 4-disc collection includes some of the most beloved comedy films of the postwar era. Includes: Whisky Galore! (1948), Passport To Pimlico (1949), The Titfield Thunderbolt (1953), The Maggie (1954).

Film Movement has been bringing out a steady supply of Ealing films, and this two-fer is another hugely welcome release. If you've ever seen either or both of these films, my hunch is you'll be generally very well pleased with the technical presentations, and the supplements on the Whisky Galore! disc are outstanding. Highly recommended. --Jeffrey Kaufmann, Blu-Ray.com

Passport to Pimlico is one of many Eagling's scripted by T.E.B. Clarke, who embodies that warm side, and his script for Charles Crichton's The Titfield Thunderbolt (1953) feels like a close relation, also on the subject of letting off steam. - Michael Barrett, Pop Matters

As usual for Ealing, the picture is brimming with delightful character portraits, from a dying man's (James Anderson) resurrection with the arrival of the stolen liquor, to mama's boy George's (Gordon Jackson) hilarious defiance of his stern, religious mother (Jean Cadell) after finding courage in several glasses of the newly-opened whiskey. Though a comedy, the film has exceptionally dramatic monochrome photography by Gerald Gibbs, images so good as to evoke memories of another classic of British cinema, Michael Powell's The Edge of the World (1937). The mostly Scottish cast includes perennial favorites like James Robertson Justice, Gordon Jackson, and Duncan Macrae (Finlay Currie narrates), but also eccentrically sexy Joan Greenwood. --Stuart Galbraith IV, DVD Talk

Ostensibly, this most underestimated of Ealing comedies is a cross between Whisky Galore! and The Titfield Thunderbolt - a whimsical story about a crew of canny Clydebankers giving a brash American a torrid time after being assigned to carry his property aboard their clapped-out steamer. Don't be fooled, however, by the leisurely pace, the gentle humour and the relatively good-natured conclusion. In reality, it's a wicked little satire on the mutual contempt that underlies Euro-American relations, and few could have handled it with such incisive insight as American-born Scot Alexander Mackendrick. --David Parkinson, Radio Times

Live From The Green Room Newsletter

CNN's Clarissa Ward on Covering the Taliban, Interviewing ISIS Commanders, and What's Next For Afghanistan