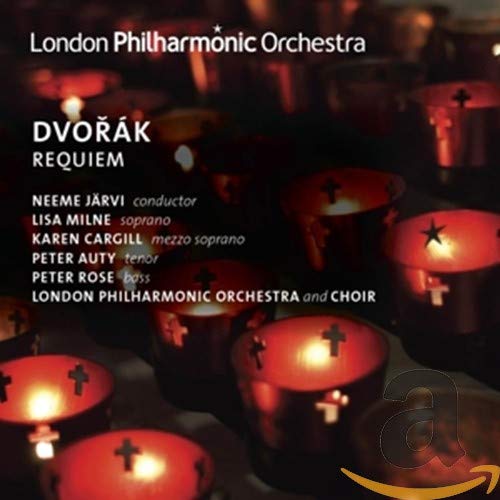 Never performed by the London Philharmonic Orchestra before, and rarely heard in concert at all, the Requiem by AntonÃ­n DvorÃ¡k captured on this CD from a live concert seems a near-forgotten masterpiece. DvorÃ¡k scholar Gervase Hughes cites this work for four soloists, chorus and orchestra as one of the composer's finest sacred creations, 'a deeply moving expression of faith on the part of a composer whose religious conviction never wavered'. It's a conviction stamped through the composer's illuminating, fervent score.

"The first and last new recording of AntonÃÂ­n DvoÅÃÂ¡k's setting of the Missa pro Defunctis, op. 89, to cross my desk was a slight disappointment. Imagine my surprise at receiving another opportunity to evaluate this lesser-known Romantic dramatization of the Requiem Mass, premiered in Birmingham, England, in 1891, in a new recording by the London Philharmonic Orchestra. The tracks were captured in live performance at London's Royal Festival Hall, and while the rendition on offer here is better for being on modern instruments, there are some blemishes in the orchestral playing and some weaknesses in the chorus, particularly in the male voices' high registers. Similarly, the soloists are good while not perhaps being the dream cast for such a demanding work. Soprano Lisa Milne has a plangent tone, with plenty of strength if perhaps too much vibrato, while Karen Cargill has an appropriately earthy timbre. Tenor Peter Auty is a little too slobbering in the operatic quality of his voice, while the best of the quartet is bass Peter Rose, who has the same puissance heard in Santa Fe Opera's Billy Budd.

Recent recordings have the advantage of the availability of a critical score, published in 2001 in the complete works of Editio BÃÂ¤renreiter Prague, approved by the DvoÅÃÂ¡k Society. This Requiem is a work that rewards multiple listenings, with its unusual use of percussion (especially in the Tuba mirum movement), its generally colorful scoring (for example, the bass clarinet croaking along with the bass soloist in the Hostias), and the elusive chromatic motif (sol-le-fi-sol) that runs through all the movements like a graveyard shudder..." -Charles T. Downey -- Ion Arts: June 8, 2010 - ionarts.blogspot.com/2010/06/dvoraks-requiem-mass.html

DvorÃ¡k's weighty, expansive setting of the Requiem is one of the great unknown treasures of the 19th century choral repertoire, and this live recording - at once imposing and imperfect - makes clear how much audiences are missing. It also, not coincidentally, suggests why the piece has not been a regular in the concert hall. The Requiem was written on a commission for the Birmingham Festival, and it partakes of some of the big-boned grandiosity of the English oratorio tradition centered on that festival - not to mention DvorÃ¡k's own tendency toward prolixity in all things. But at the same time, it boasts some of the composer's most appealing traits, including a fecund melodic vein and a beautiful harmonic palette tinged with folk music. Neeme JÃ¤rvi leads a sturdy, evocative performance graced by gorgeous singing from the London Philharmonic Choir. All the disc needs is a better lineup of solo singers; this crew ranges from passable to barely listenable. -- SFGate, Joshua Kosman, March 7, 2010

His masterpiece it's not, but Dvorak's Requiem still deserves more airings than it gets. The LPO and Choir here make an impressive case, with a performance under Jarvi of abundant raw energy and ample drama, a vast sonic spectacle infused with the spirits of Mozart and Brahms. Rounding out the knockout choral forces is a first-rate vocal quartet brightly illuminated by soprano Lisa Milne and mezzo Karen Cargill. -- The Plain Dealer, Zachary Lewis, March 14, 2010

It's good to see Detroit Symphony Orchestra music director emeritus Neeme Jarvi up to his old tricks -- making charismatic recordings of overlooked repertoire like Antonin Dvorak's "Requiem" (***, 2 CDs, LPO). Though it rarely gets played, the piece, written in 1890, offers a winning combination of spacious pacing, dramatic intensity and soothing consolation without tarted-up effects or bombast. Jarvi's reading with the London Philharmonic Orchestra and Choir, taken from a live performance in early 2009, flows naturally with warm emotion and spontaneity but boils quickly when it needs to. The vocal soloists -- Lisa Milne, Karen Cargill, Peter Auty, Peter Rose -- are strong, and orchestra and chorus merge effectively. -- Detroit Free Press, Mark Stryker, March 14, 2010

The greatest sustained beauty is to be found in DvoÅÃ¡k's infrequently performed Requiem, which is a more personal expression of sentiments than is usual in a mass for the dead. The 19th century saw Requiems from the ultra-grandiose (Berlioz) to the ultra-operatic (Verdi), and DvoÅÃ¡k's makes no attempt to scale those heights. What he does is subtler and was surely more meaningful to the composer himself, given his unwavering religious faith. Using the traditional Requiem text as a jumping-off point rather than a given, he creates an unusually structured work in two parts. The first runs from "Requiem aeternam" through the "Lacrimosa," and is permeated by a sorrowful three-note motif first heard at the work's opening. The second part includes the "Offertorium," "Sanctus" and "Agnus Dei" - but before the final part, DvoÅÃ¡k interpolates a "Pie Jesu" section with words from the final text of the "Dies Irae" portion. The result is a work that is intimate and strongly heartfelt and that comes across, when well performed, as a personal plea - not just an institutional one - for mercy and peace after death. It is the emotionalism of the appeal that comes through most strongly in the London Philharmonic Orchestra's performance, with soloists and chorus leaning into the music with fervor and bringing forth not only the beauty of the composer's scoring but also the intensity with which he clearly felt the words as he chose to present them. This live recording from February 2009 was the LPO's first performance of this Requiem, and conductor Neeme JÃ¤rvi clearly wanted there to be a series of emotional high points throughout its hour and a half. The LPO's sound is, in truth, not ideally suited to music of such warmth and fluidity - the orchestra boasts clarity, even astringency, rather than the broader tone of some Central European ensembles. But in this recording, everyone seems determined to rise to the heights that the subject matter demands, and the result is a very moving experience that makes one wonder why this work is not performed more frequently. -- Infodad.com, March 18, 2010

Who are the Taliban leaders ruling Afghanistan? Pakistan cheers Taliban out of ‘fear of India’ – despite spillover threat
FRENCH POLITICS

Macron to increase oversight of police after brutality and racism claims

Afghan media mogul Saad Mohseni: 'We have to engage with the Taliban'

Daraa, cradle of uprising against Syrian regime, starts to rebuild after 75-day siege

Why China is developing a game-changing thorium-fuelled nuclear reactor

Afghan media mogul Saad Mohseni: 'We have to engage with the Taliban'

A day in Deauville #10: The winners unveiled

A day in Deauville #9 - Michael Shannon: The man who played in more than 100 films and TV series

Why China is developing a game-changing thorium-fuelled nuclear reactor

Fishing for Sardinia's red coral: A dangerous but profitable business

Read more about the environment
Partnership

Discover all our partners
Archives

Browse the archives of all France 24 articles, shows and videos since 2006

The content you requested does not exist or is not available anymore.