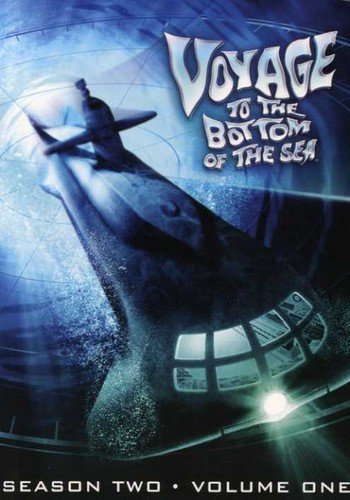 The SSRN Seaview, the world's most technologically advanced submarine, is back and more powerful than ever! Come aboard with Admiral Nelson, Captain Crane, and their crew as they brave hostile waters and explore uncharted depths, keeping the world safe from the enemies of mankind. Season Two is full of innovative series firsts: it's the first season to be shot in color, and the Seaview has been masterfully redesigned to house the spectacular Flying Sub! Filled with espionage, action, sci-fi and suspense, Voyage to the Bottom of the Sea is a true TV classic!

Bolstered by its first-season success, Voyage to the Bottom of the Sea returned on September 19, 1965, with a second season full of surprises. Now in full color, the continuing adventures of Adm. Nelson (Richard Basehart), Capt. Crane (David Hedison) and the intrepid crew of the nuclear sub Seaview were no longer limited to the ocean depths; the advent of the "Flying Sub" (officially dubbed "FS-1"), enabled Nelson and crew to expand the horizons of their top-secret service, flying at super-sonic speed or plunging into the ocean with the push of a joystick. The manta-shaped FS-1 quickly became a staple of nearly every episode, routinely deployed from its launch-bay on the newly upgraded Seaview, still the most elegant submarine of fact or fiction. Cold-war conspiracies and power-hungry villains remain common in these 13 episodes, all set in the "near future" of the 1970s, and spiced up with science-fiction scenarios familiar to any fan of producer Irwin Allen's other '60s SF shows like Land of the Giants and The Time Tunnel. And while the show's occasional monsters (in episodes like "Jonah and the Whale," "Leviathan" and "The Monster from Outer Space") are laughably cheesy by modern standards, they're balanced out by intelligent plots (many written by William Welch) involving espionage, sabotage, nuclear threats, and high-tech weaponry.

These are the plot elements that dominate most of these well-written episodes, capably handled by directors like Sobey Martin, Leo Penn (father of Sean), Nathan Juran (The 7th Voyage of Sinbad) and others. And while Basehart and Hedison were never the most dynamic performers, they set a solid foundation for the series, holding their own with such prominent guest stars as Gia Scala ("Jonah and the Whale"), Victor Buono ("The Cyborg"), future indie-film pioneer John Cassavetes ("The Peacemaker"), soon-to-be-"Sulu" George Takei ("The Silent Saboteurs"), and many other '60s TV stalwarts. Voyage never wavered from its stodgy pacing, flat humor, and occasional lapses in logic (like having divers talk while their mouths are stuffed with oxygen regulators, etc.), but despite occasional gaps in credibility, it remained a slick, smart adventure series rooted in the political reality of the cold war. As with previous Voyage DVD sets, these episodes are so crisp and clean that you can easily see the guide-wires used to "fly" the Flying Sub (on a "Lydecker" rig, named after special effects pioneer Howard Lydecker), and loyal fans will enjoy the mid-season shift to "sonar-screen" opening credits, economical recycling of sets and stock footage, and the lively contributions of supporting cast members Bob Dowdell (as "Chip" Morton), Terry Becker (Chief Sharkey), Allen Hunt ("Stu" Riley), and Del Monroe (Kowalski). Bonus features are minimal but worthwhile, especially for fans: There's over 20 minutes of raw special effects footage (mostly redundant, but of interest to TV and FX historians), and photo galleries consisting of concept art, episode photos, behind-the-scenes photos and publicity stills. Best of all--and not mentioned on the DVD packaging--is the inclusion of "Voyage to See What's on the Bottom," a MAD magazine TV parody from 1966, viewable on-screen in its hilarious entirety. Nostalgic fun for seasoned fans, and likely to gain a new following on DVD, Voyage to the Bottom of the Sea is still entertaining after all these years. --Jeff Shannon

It is as much a flavor as this is a scent….

Yeah but it's pink!

Artificial flavor punch... yourself in the nuts please 😅

It has vitamin C!

They missed a great opportunity to say that it has Vitamin Sea....

A great close up of remoras hitching a ride on a whale shark (Rhincodon typus). Remoras, or shark suckers are members of the bony fish family Echeneidae. They use a suction cup–disc on top of their heads to attach themselves to larger animals such as sharks, turtles and manta rays. This commensal relationship benefits the remoras by giving them a free ride and access to food scraps while the host animal benefits from the removal of parasites. However, I am curious how much extra drag (and energy expenditure) the presence of remoras exert on the host.

Ancient mariners feared remoras, believing these fish had the power to slow or even stop a ship by attaching themselves to it. In fact, the word remora means "delay" in Latin. ... vctops 3-Piece Elegant Embroidery Quilt Set with 2 Shams 100% Co

Although mutualistic, it sure seems like the whale shark gets the short end of this deal.

So the shark doesn't grow?

I'm jealous of this love affair between diver and 🦈 shark. It's a happy healthy love story. 💦

I'm laughing at the one where the wee shark is headbutting his reg...so darn cute.

Ugggh... I'm sorry, I'm going to be that guy. Habituating wildlife to human interaction isn't the cute story the news often makes it out to be. This kind of thing usually puts both humans and animals at greater risk of injury or otherwise.

Narwhals (Monodon monoceros) on the surface. The tusks are actually one of two teeth male narwhals possess. The left tooth grows out of the skull while the right tooth remains within. Females also have two teeth, but only about 15% have the tooth grow out. The tusk has no enamel coating and its function(s) are not well understood. It is known that the tusk can sense environmental conditions (salinity), that males use it to contest for mates and it has been documented as an aid in catching fish. Just what the meaning of the tapping is in this video is unknown. ... iDesign Clarity Fashion Jewelry Organizer for Rings, Earrings, B

You got that right!!!

So funny and sadly true!!😥

I think I understood, but I’m not sure. Could someone clarify?

An insult to dodo birds

Really? This stupid meme makes YOU look like the dodo.